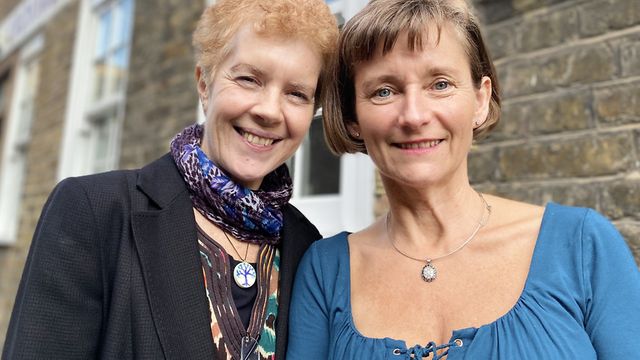 Lisa Longstaff of Women Against Rape and Niki Adams of the English Collective of Prostitutes outside Crossroads Women's Centre
in Kentish Town where they are based - Credit: Archant

In 1995 Women Against Rape and the English Collective of Prostitutes joined forces to bring England’s first private prosecution for the assaults on two sex workers, now a play tells the story of their fight

In 1991, a mother of two called a police station to report a brutal sex attack.

Although they took down details, a WPC told her to "go home and live with it" because she was a sex worker who had been raped by a client.

Then a year later, there was a near identical attack by the same man, also in his home.

This time the Police hoped for a prosecution to put away a seriously violent offender who had tied up his victims, raped them at knifepoint, and taken obscene photos.

But despite statements and medical evidence, the Crown Prosecution Service dropped the charges and released him.

"When the women first came to us, Lisa and I met them," says Niki Adams from The English Collective of Prostitutes.

"One was seeking an injunction because when he was let out he came back to threaten her and her family. It was clear to us this man was extremely dangerous and likely to attack again."

Joining forces with Lisa Longstaff from Women Against Rape - both based at Kentish Town's Crossroads Women's Centre - the two organisations hatched a plan to bring England's first private prosecution for rape.

But with no legal aid for civil cases, Longstaff and Adams had to ask lawyers to work pro bono.

"It was the private prosecution against the murderers of Stephen Lawrence that gave us the idea," says Longstaff. "We had dozens of women coming to us saying 'my case has been closed, I don't understand why, the evidence seems strong'. We were taking on the role of the CPS to prosecute the case but until then we only knew defence lawyers to defend sex workers against criminal charges or ask for injunctions."

Eventually they found a lawyer and the case went to trial in 1995 on charges of false imprisonment, ABH, indecent assault, and rape.

"When she reported the first attack the woman was put off even making a statement and told by a WPC 'this has no chance of getting to court you will never stand up as a credible witness'," says Adams. "But a police offcer at the station realised it was a very serious attack and the man would do it again. Once there were two complaints he went back to the first woman and said 'we're ready to prosecute it now'. The key issue was they had never met, and their reports were strikingly similar with compelling verification of the same kind of attack."

In court, the defence barrister argued that both women had consented to everything.

"He tried to play dirty and do a character asassination, playing to percieved prejudices," says Adams.

But prosecutor Brendan Finucane presented the case as a clear question of protection and safety for all women.

'Prostitutes have no lesser rights than any other woman in the land. Prostitutes go to have consensual sex for money, not to have sex at knifepoint. A woman who yields through fear of force or duress is raped,' he told them.

"He expected better of the jury in understanding what a serious attack it was and that what was at stake was whether the two women consented to sex. He explained that sex at the point of a knife is not consent," says Adams.

The jury however weren't told that the defendant had previously been jailed for trying to snatch a 20-year-old woman off the street and into his van by holding a knife to her throat. She was only saved by a passing motorist.

Adams says the cost to both women of bringing the case was "very high". "The court was near their homes and family members got to hear about the case. One women had to leave the area, the other stayed on but lived under siege, with the repercussions of bringing the case, both had young kids."

Longstaff hails their bravery in testifying in the face of bruising questioning.

"This was someone who was going to attack again and one of their prime motivations was to stop him. When women make that difficult decision to go to court - and sex workers face more stigma than most women - they often describe it as like being put on trial themselves. But the only way to get justice is prove you are telling the truth."

"The law makes it illegal to work with other women from premises or in close proximity on the street. Prosecution laws put women in danger by forcing them to work in isolation where they are more vulnerable and there is a much greater risk of attack. We've had cases where men pick on women because they are sex workers and say 'you are not going to be able to report this'."

The landmark case has been turned into a play performed this week at Clean Break in Kentish Town. Lesley Delmenico's No Bad Women uses verbatim text from the court transcripts.

"Everything the women say is straight from the text," says Adams. "She's done a great job of presenting it as dramatic, while countering the established view of dramas which portray sex workers as voiceless, poor victims who need saving by increased police powers, instead of looking to see what we're doing to keep ourselves safe and how we can be supported.

"It's a powerful, moving, even uplifting play. The women are not cowering. They are quite fesity, and standing up for themselves."

Longstaff says at at time when rape prosecutions are decreasing, the media is focusing on supposedly false allegations, and complainants face the intrusion of trawling through their mobile phone records, No Bad Women remains vitally relevant.

"It feels we have taken a big step back this year. With women coming forward in much larger numbers because of the #Metoo movement, reporting figures have tripled in the last four years, but the CPS hasn't kept pace and there has been a massive fall in charging and prosecutions and low conviction rates. Society has changed but the CPS is even more likely to judge women's behaviour and whether they are going to be reliable witness. We publised a dossier of cases they didn't prosecute and all the women could be described as low social status; it was a family member, they were poor, single mothers, lesbian or sex workers, or children - the men had more social power than them. There's discrimination going on."

Adams says poverty and desperation push women towards prostitution. "We never glamorise and say it's a great job, sometimes it's a survival strategy. These are the realities of women's lives, when people are living below the poverty line, women and especially mothers do what they have to to make sure their children are fed."

"There are still layers of prejudice, not just against sex workers, but women with mental health problems, women who use drugs. Who is respectable enough to be believed? It's a very small club."

No Bad Women runs at Clean Break in Patshull Road, NW5 until November 14. Tickets from www.brownpapertickets.com