Marian Okeibunor is a rape survivor and mother of two young children. Until last week she was housed by social services in Lewisham. She and her family were cruelly evicted and are now homeless and destitute.

Ms Okeibunor’s lawyer wrote to the Home Office on Wednesday night threatening court action unless they provide her with housing and support.  We don’t know how long this legal challenge will take which is why we are asking people to also press Lewisham Council to reinstate her housing and support. 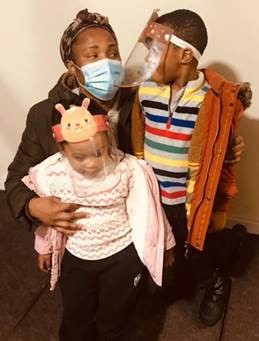 Over 60 people have already written in support of Ms Okeibunor and her children.  She asked us to pass on this message:

“Thanks to each and every one for your support.  We really appreciate it. The kids and l are overwhelmed over the number of people supporting and encouraging us.”

Many local people in Lewisham have been contacting Mayor, Damien Egan to demand the Council provide housing for Ms Okeibunor’s family.  Cllr. Alan Hall has kindly offered Ms Okeibunor his full support and has written to the Mayor asking for a review of the decision to evict the family two weeks ago.

Please help pursue the two ways that the family can get housing.

Ms Okeibunor was acknowledged as an asylum seeker but told she had to attend an in-person screening appointment in Croydon. How can the Home Office justify insisting that Ms Okeibunor travel two hours each way on a bus with her children to attend this interview in a pandemic? This goes against government regulations to stay home. Considering that Ms Okeibunor is a woman of colour, is this a racist double standard?

Also, Women Against Rape (WAR) already wrote to explain that she is too traumatised to be questioned in this way having only very recently been able to start to speak about what she’d suffered. She needs WAR’s specialist help and in the mean time she needs housing and support.

Lewisham social services had been supporting Ms Okeibunor since November 2019 (under “Section 17” which is the Council’s legal duty to safeguard and promote the welfare of children in need, and is the budget of last resort in many cases). Her child has been attending St. Saviour's R.C. Primary School in Bonfield Road, Lewisham for three years. WAR had already written to the Council explaining Ms Okeibunor had asylum grounds to be in the UK because of the sexual violence she suffered.  She should never have been evicted, especially not during a pandemic.

Please note that when WAR protested about her being evicted, Senior resettlement officer, Fergus Downie callously wrote to say that “social workers have assessed the family’s circumstances and options” and made Ms Okeibunor an “offer” which would prevent them being made homeless. This offer was to be returned to Nigeria (under the so-called Voluntary Return scheme) where she and the children would be in danger. Mr Downie said that as a result of our letter, he would now “have to escalate this as a safeguarding matter” – which Ms Okeibunor took as code for threatening that the children might be taken to care. This is completely at odds with the Council’s new “Sanctuary Strategy” and more in accordance with the “hostile environment” regime it replaced, when Home Office staff were embedded in the Council’s Social Services.