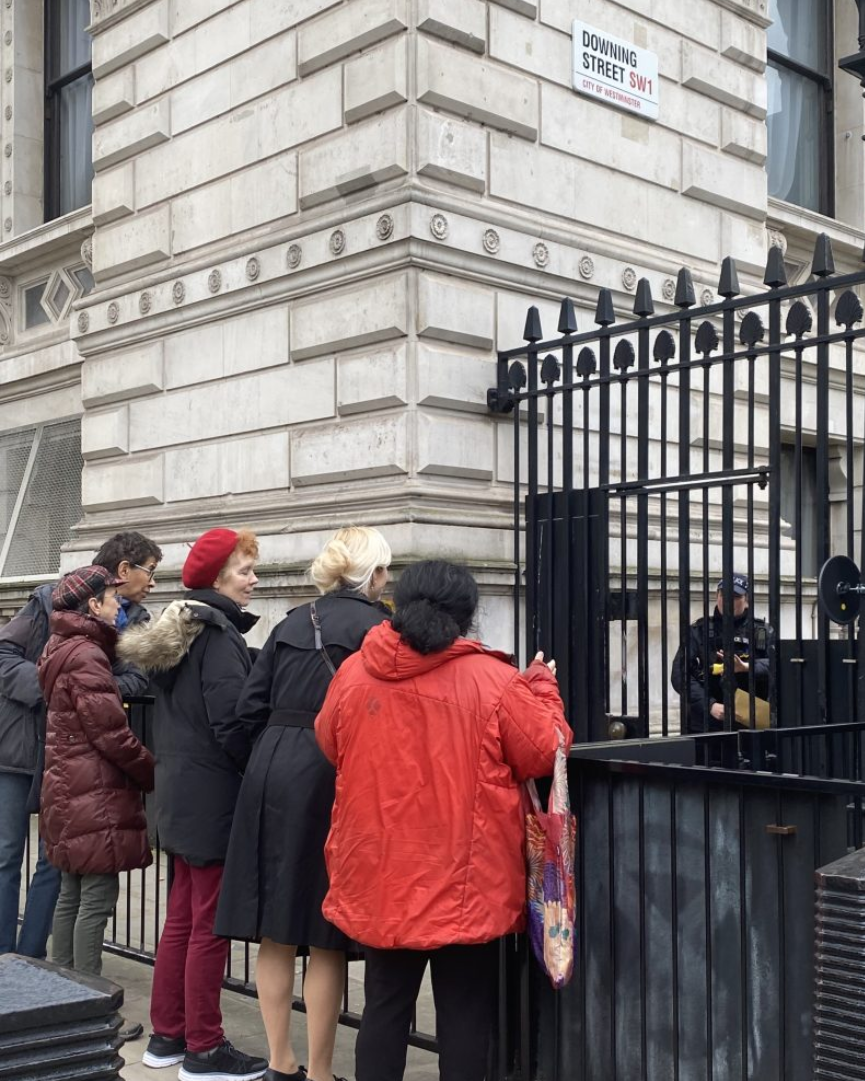 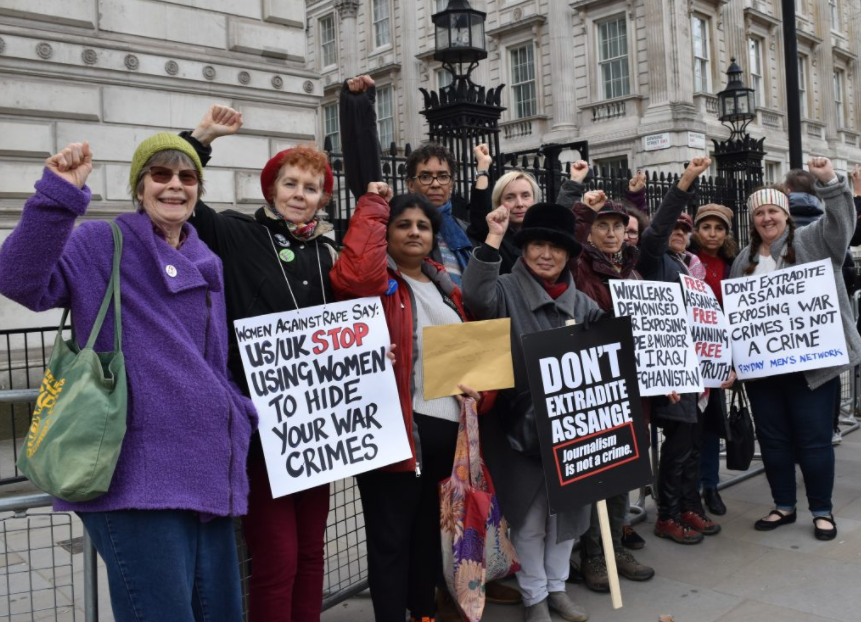 A delegation of women handed in the Jurists letter to 10 Downing St., including from Legal Action for Women and Women Against Rape who signed the letter.

The jurists’ letter asks for the rule of law to be upheld and details several issues with the way the case has been conducted to date. These include the difficulties that Assange has encountered communicating with his legal counsel from Belmarsh Prison and the systematic compromise of his legally privileged meetings while he was living in the Ecuadorian Embassy in London. Icelandic lawyer Olga Margrét Cilia notes that “Everyone has the right to a fair trial and the presumption of innocence.”

The signatories highlight what they see as the disregard shown by the British authorities towards their duties and responsibilities under British and international law. Their letter calls on the UK authorities to deny the US extradition request and urges the UK government to immediately release Mr Assange.

Hong Kong barrister Robert Tibbo points out that “governments have resorted to using their enormous political powers and resources to permanently silence Mr Assange with a clear motivation to create a global chilling effect on journalism and freedom of expression. The US, UK and other nations must be held to account for their unlawful treatment of him, but also for the unlawful acts they have committed as exposed by Mr Assange in publishing evidence provided by whistleblowers.”

The jurists express alarm at the sweeping, extra-territorial claims being made by the prosecution of a non-US citizen for conduct outside the United States. Australian barrister Greg Barns says that “Many Australian lawyers are rightly disturbed by the Assange case. It represents a threat by the United States to abuse extra-territorial reach so it can seek to prosecute individuals who have no link with the US jurisdiction but who simply publish material which displeases Washington.”

Prof. Heather Ellis Cucolo, of the New York Law School, adds that “Mr. Assange would no doubt face a politicized show trial in the United States”.

The signatories call on the British legal community to reclaim professional standards, to condemn the torture of Mr. Assange and to engage in urgent actions to secure his immediate and safe release.

Media queries should be directed to Deepa Govindarajan Driver on + 44 7979 917 197 or deepadriver@protonmail.com

Mr Assange’s persecution comes after a decade of smearing and intentionally-prolonged preliminary investigations in Sweden, for which charges have never
been raised. Freedom of Information Act (FoIA) requests have since revealed
the extent of pressure put on Swedish authorities by the UK Crown Prosecution
Service, to keep these preliminary investigations artificially open for many
years to ensure Mr Assange remained isolated in the Ecuadorean embassy in
London. FoIA requests have also revealed the intentional destruction of
evidentiary trails by the CPS.

Prominent UK politicians have engaged in negotiations with the Ecuadorean government to extract Mr Assange from asylum, and have even claimed credit for Mr Assange being deprived of his Ecuadorean citizenship without due process. Since Mr Assange
was dragged out of asylum, he has been imprisoned by the UK authorities in the
maximum-security Belmarsh prison, in harsh conditions and until recently in
isolation, on the flimsy grounds of a purported bail violation arising from
seeking asylum. An extradition request has also since been filed with the UK by
the United States authorities, and Mr Assange faces charges including under the
Espionage Act, and so he continues to be jailed pending extradition to face a
potential jail term of 175 years and a trial without First Amendment
protections. The Swedish investigations meanwhile have been closed without a
charge being raised after a decade of “investigation”.

Civil society groups have spoken out against the persecution of Mr Assange by the U.K.
authorities. Over 100 international doctors have also publicly condemned Mr
Assange’s mistreatment. Women Against Rape (UK), which has supported women
fighting for justice for over 40 years say: “We are alarmed at the unusual zeal
with which Julian Assange has been pursued. Do the victims of murder, rape and
torture by US-UK occupiers in Iraq and Afghanistan not count? How can we find
out about state crimes if journalists like Assange and whistle-blowers like
Chelsea Manning are silenced?”

The case holds particularly worrying omens for the profession of investigative journalism. National Union of Journalists (NUJ) executive member Tim Dawson who spoke at a recent public meeting in London on 4 Feb said: “The legal devices being deployed to try and take Julian Assange to the US are unprecedented and terrifying for anyone whose journalism touches on state security, defence or espionage. If Assange is sent from here to start a prison sentence that could be as long as 175 years, then no journalist is safe.”