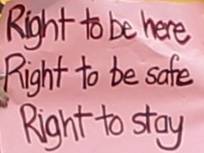 Ms R (62), a longstanding member of All African Women’s Group, finally won her right to stay in the UK after a 13 year struggle.  Ms R left Jamaica in 1990 to escape domestic violence from her partner.  Ms R’s father, who was a British citizen, had encouraged her to leave and come to live with him in Britain and eventually bring her son.  Sadly her father died in 1991 and she was forced to return to Jamaica and her abusive partner.  Unknown to Ms R this man started raping their son who, in 1997, left the island to escape this abuse.  Ms R was tormented by guilt when she found out what her partner had done.  She left for Britain again in 2000 and was able to remain for several years as a student while trying to regularise her status.  Private lawyers (charging a fortune) put together a number of applications for her to stay in the UK but they were so bad they were refused by the Home Office.

Ms R was close to ending her life when she came to BWRAP in January 2013.  She had never been able to speak before about the horrific abuse her son had suffered and her anguish at not being able to protect him.

She had been living hand to mouth and would have been homeless without a kindly landlord allowing Ms R to stay for free in one of his properties. (This would be illegal under the Immigration Act 2014).  The stress of being destitute and living for years under the threat of deportation had taken a terrible toll on her mental and physical health. On one occasion when she was asked how she was managing without any income, she said:

“I don’t know, sometimes I can do a little sewing in exchange for food, I never know if I am going to eat that day, I only get clothes if I find something in the jumble here (at the women’s centre), I have nothing for myself.”

In order to get legal aid for a lawyer to represent her Ms R had to apply for “Exceptional Case Funding” as she was not automatically entitled. This application was callously refused by the Legal Aid Agency despite compelling expert evidence from Notre Dame and ourselves confirming that Ms R is a traumatised and vulnerable woman. In tandem with this, BWRAP supported Ms R in making a formal complaint against one of the negligent private lawyers.

In the autumn of 2015 Ms R was at another very low point, coping with anxiety and panic attacks caused by the fear of being sent back. After much effort, BWRAP found her a solicitor at Camden Law Centre and a psychiatrist who wrote a report confirming that Ms R was traumatised.    At her appeal hearing Judge Rodger acknowledged that Ms R was a “vulnerable witness” in accordance with the Joint Presidential Guidance Note 2 of 2010*.  The Judge took into account the wealth of medical and other evidence including BWRAP’s written and practical support and Ms R’s “real” fear that she could be targeted by her community for what happened to her son.  She was finally granted Leave to Remain under Article 8 of the Human Rights Act on the grounds that it would be a disproportionate breach of her right to private life if she was returned to Jamaica. After thirteen years, Ms R has been given two and a half years status – a welcome, though insufficient, victory considering all that Ms R has suffered. On winning the right to stay Ms R commented:

“If only I had found this sympathetic support group earlier – they have changed everything and made it possible for me to smile again. A great weight is off my mind – my life can definitely begin again!”

*The Practice and Guidance Notes which give guidance on the approach to be adopted by First Tier Tribunal judges when considering all the personal circumstances of an “incapacitated or vulnerable person when assessing their evidence”.