This Saturday, 15 October, the third National Protest to close down Derwentside is being held.

Speakers include All African Women’s Group (AAWG) many of whom have been in detention and threatened with deportation and other members of Global Women Against Deportations.

The protest is also to demand that the Nationality and Borders Bill and the RWANDA plan are scrapped. The Rwanda plan aims to send asylum seekers to Rwanda before their claim is heard and despite evidence to show that it is not a safe country.  Some AAWG women are rape survivors who fled the genocide in Rwanda. They know first-hand how dangerous and life threatening the situation there is. One woman’s husband was deported from the UK back to Rwanda and has disappeared not to be heard of since.

Please send messages of support to read out. 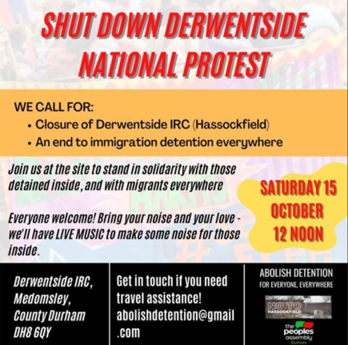 Organised by the Campaign Against the Arms Trade. Protests also planned in Berlin, Brussels and Madrid to Stop the Italy-Libya Memorandum! Solidarity with Migrants.  Frontex is a multinational company and is central to maintaining the hostile immigration environment here and across European borders.  Frontex is used to force large numbers of refugees travelling by boat back to sea in pushback operations that violate international law. See more here.

Hope to see you on this busy weekend in Durham or London. 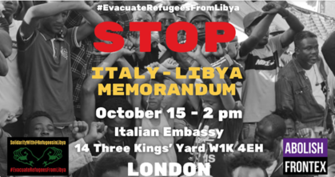