Rallying Against the Police Bill

Women and allies are joining a movement that's coming together across Britain to opose the government's onslaught of harmful legislation, say SARA CALLAWAY and LISA LONGSTAFF 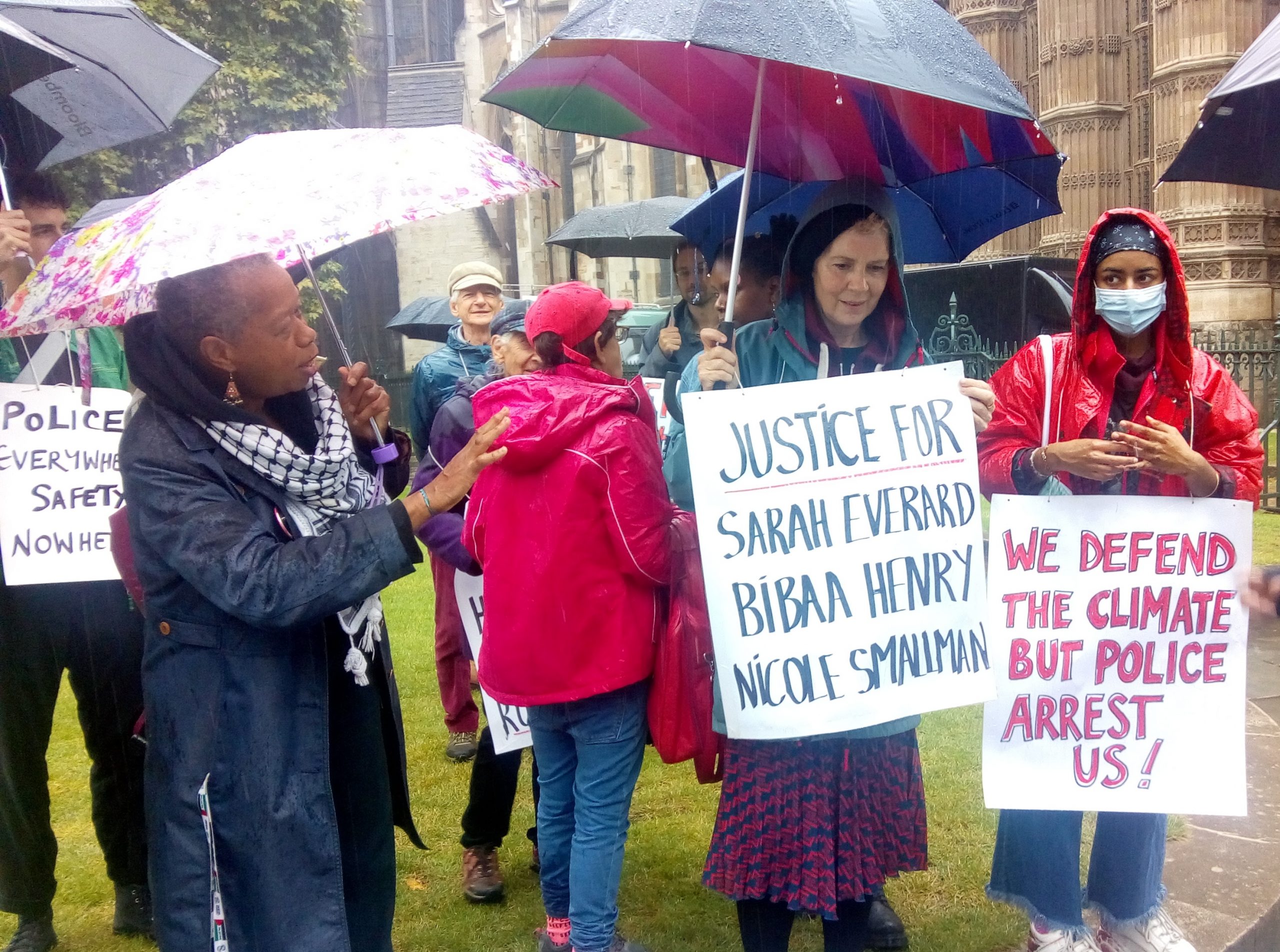 AS THE Police, Crime, Sentencing and Courts Bill was debated in the Lords last week, women held a lively rally outside Parliament, highlighting our case against this repressive legislation.

In pouring rain, at short notice, a determined and diverse network of campaigns and individuals joined in the open mic, speaking out about how this Bill would affect our lives and our loved ones.

Protesters welcomed Green politicians Natalie Bennett and Jenny Jones, who came over to speak at the start of the rally.

They described opposition in the Lords to the Bill, even among Tories and especially lawyers. Both are working to scrap the whole Bill, or as a last resort, to modify the worst aspects.

Women in BLM Cardiff just won against a £2,000 fine for protesting outside Cardiff Bay police station — it was thrown out of court.

There were cheers as campaigners to Free Siyanda Mngaza, a young black woman jailed for defending herself from a racist attack by three adults, arrived with their banner, and Siyanda’s mother rang from Birmingham with a message of support.

We pledged to write to Siyanda and join efforts to overturn her conviction. Another mother gave a heartbreaking account of her baby’s death in hospital in unexplained circumstances, and her efforts for a full investigation.

Other speakers included women from House of Shango, a black alternative housing network in south London; the English Collective of Prostitutes, black solidarity members of the RMT union; Gypsy, Roma and Traveller activists.

There was support from men: Payday Men’s Network, Camden Momentum’s chair, and a member of XR Samba Band.

John McDonnell MP, called to the mic, was welcomed by the crowd and pointed out that the Bill would target strikers and that unions need to oppose it.

A speaker from Reclaim Brighton Pride said: “This Bill will reduce our ability to organise political Pride events. We don’t want parties sponsored by big corporations.

“We know that queer and trans women bear the most violence in our society, especially those of colour. We need the ability to organise against that … to be able to go in the streets and say: ‘No more’!”

Women Against Rape, which called the protest jointly with Women of Colour Global Women’s Strike, said: “Police have been found to be institutionally sexist, racist and corrupt. They don’t need more powers. They need to use the powers they have to protect women and children and everyone against violent men, including violent officers.

“Women officers and wives of police are now publicly complaining that domestic violence they suffer is never addressed by police.

“For decades they refused to investigate child abuse — from Rotherham to Shirley Oaks — and racist attacks. They have virtually decriminalised rape and domestic violence.”

The Bill is part of a raft of repressive legislation, notably the Nationality and Borders Bill, which is aimed at further eroding people’s rights to escape persecution, war, poverty and climate disaster, and it particularly attacks rape survivors claiming asylum in Britain.

The government is unleashing repression against all of us demanding justice and protection — but a movement is coming together across Britain opposing it.

We are also active with local groups in #KilltheBill networks. See our joint statement: Why women oppose the Police Bill.