THE NATIONALITY AND BORDERS BILL IS BASED ON LIES

The Nationality and Borders Bill is based on lies. Home secretary Priti Patel tried to fuel hostility against people forced to cross borders to save their lives by saying that “vulnerable women and children” are being “elbowed” out of the way by men crossing the channel in boats and “jumping the queue”

People, including women and children, are risking their lives trying to cross the Channel because they are desperate to be safe.

The Bill gives Border Force officials the power to turn back boats at sea and “immunity from conviction” if someone dies as a result[i]. This is state-sanctioned murder.

The new law will penalize ALL asylum seekers, including victims of trafficking, domestic violence, rape and other torture. The Home Office admits that 62% of asylum seekers would be instantly penalised purely because of how they arrived in the UK– and forever excluded from the protection of the Refugee Convention.

Women, especially mothers and/or rape survivors will particularly suffer. Over 70% of women asylum seekers have fled rape. Rape victims who delay reporting will be fast tracked for deportation, their claims dismissed as “inadmissible” or “unsubstantiated” even ignoring medical evidence because it is provided “late”. This flies in the face of court precedents[xii] that Women Against Rape helped win showing that women are often “unable rather than unwilling” to report rape because of trauma and fear of stigma and discrimination.[xiii] Mothers who win only temporary status are prevented from reuniting with children they were forced to leave behind when they fled

This Bill will make it harder for women to win asylum. Changes to how “persecution” and “social group” in the Refugee Convention are measured will hurt women fleeing FGM, domestic violence, trafficking and rape.

The asylum system is not overloaded by “meritless claims”. People are denied a fair hearing by a system saturated with sexism, racism and other prejudice, and by officials trained in a “culture of disbelief and carelessness” [ii] to refuse claims no matter how compelling. Legal aid cuts of up to £1.6 billion[i] have made it impossible to get a good lawyer. Deliberate Home Office foot dragging[ii] and unjustified appeals by the Home Office add to the backlog of cases. Despite this ¾ of claims succeed[iii].

Britain takes many fewer asylum seekers than most other European countries[iv]. Net migration is down by 20% since 2019[v]. Most people flee within their own or neighbouring country; 85% of refugees are hosted by countries of the Global South[vi]. Only 25,000 people have come to the UK by “safe and legal” resettlement schemes since 2015 – that is just six people per local authority area.

Immigrant people are not a drain on the UK. Migrants from the European Economic Area contributed 34% more in taxes[vii] than they received in benefits between 2001 and 2011. Many industries depend on migrants – 26% of NHS doctors[viii] were born abroad[ix].

New reception centres (detention by any other name) and off shore processing will lead to more abuse, including rape[xiv] [xv]. Faster removals for so-called foreign criminals will penalise women, like a mother in the All African Women’s Group (AAWG) who, having been made destitute, used false papers to work to support her children.

Immigration policy is economic policy. Denying people legal status in the UK and a deliberate policy of destitution while prohibiting waged work, as well as austerity cuts, zero hours contracts, racism and other discrimination, boost profits for big business as workers have less power to refuse exploitation and low pay. A recent survey, Up from Destitution found 48% of women asylum seekers had no income at all and this included mothers with young children.

Immigration policy supports imperialist proxy wars for corporate profit, the arms trade and environmental destruction.  £7.5 trillion is owed by Britain alone in reparations for the Atlantic slave trade. India suffered 200 years of “exploitation, deprivation, looting and destruction”[xvi]. As AAWG say: “We have a right to be here. Our work has created the UK’s wealth through centuries of slavery and colonialism.” The international movement for #Papers4All is growing.

Priti Patel accuses asylum seekers and immigrants of breaking the law but she is the criminal.  She stoked up racism by calling the English football teams anti-racist action “gesture politics”; instructed the police to break up the Sarah Everard vigil; was sacked for making secret deals with the apartheid state of Israel while freezing ⅓ of Britain’s aid to Palestinians; worked as a lobbyist for the murderous tobacco and arms industry; promotes fracking; targeted “activist lawyers” leading to at least one attempted murder; admitted bullying an employee. She tries to divide and rule by offering citizenship to some Windrush people whose longstanding citizenship the UK government had illegally denied, but the horrors and scars of the deaths, deportations and refusal of compensation over years of hostile environment will not be forgotten or forgiven.

Treating asylum seekers and refugees as disposable aims to lower everyone’s standards, to get people used to some lives not counting. It goes hand in hand with the Do Not Resuscitate notices put on people with disabilities during the pandemic, the police killings of people of colour for which there has been no justice, the decriminalisation of rape and sexual assault, the criminalisation of homelessness and begging, forced adoptions of working-class children, many children of colour, from their mothers, mostly single mothers. Enforced destitution, first introduced against asylum seekers has been spreading to others – over 130,000 people have died from the impact of benefit cuts and austerity[xvii].

The Covid pandemic showed how dependent everyone’s survival is on caring work, overwhelmingly done by women, in the family and outside, unwaged or low waged, with or without papers. The contribution of immigrant people and refugees is visible and acknowledged as never before but this has not brought an increase in rights and wages. While nurses were offered a shameless 1% increase for risking their lives to save lives during the pandemic, many immigrant NHS workers are still denied access to the very service they provide[xviii].  The demand for a Care Income[xix] would be some recognition for this vital contribution.

UK-born or not, with or without papers, in defending immigrants and asylum seekers we defend ourselves from a criminal and callous government. The Nationality and Borders Bill must go.

Global Women Against Deportations includes the All African Women’s Group, a 100 strong organisation of women asylum seekers and refugees from every continent along with Legal Action for Women, Women Against Rape and Women of Colour/Global Women’s Strike. 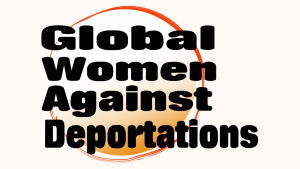 Global Women Against Deportations includes the All African Women’s Group, a 100 strong organisation of women asylum seekers and refugees from every continent along with Legal Action for Women, Women Against Rape and Women of Colour/Global Women’s Strike.

‘Serious flaws” in the National Referral Mechanism for victims of trafficking meant that in 2017 of the 5,145 cases, 3,273 had no decision after a year. UK Human Rights Blog, https://is.gd/F4GtAl

[iii] Source: https://www.freemovement.org.uk/statistics-refugees-uk/ “Once the initial grants of asylum are combined with the wins on appeal, the Home Office estimates that as many as 74% of processed asylum claims are successful.”

[xi] Do refugees have to stay in the first safe country they reach? - Full Fact

[xvi] At the beginning of the 18th Century, India's share of the world economy was 23%, as large as all of Europe put together. By the time the British departed India, it had dropped to less than 4%. https://www.bbc.co.uk/news/world-asia-india-33618621