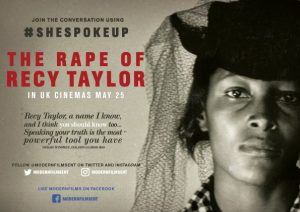 ❝This harrowing and very instructive documentary from Nancy Buirski is about the remarkable courage of Recy Taylor, a young black woman in Abbeville, Alabama, in the United States. After she was raped on her way home from church by six white teenage boys in 1944, Taylor refused to stay silent like all the other victims of this very commonplace crime.❞

With the help of her community, the case was taken up by the NAACP and no less a person than Rosa Parks spearheaded the campaign . . . Peter Bradshaw, The Guardian, 25 May 2018

In May, BWRAP & WAR hosted a screening of The Rape of Recy Taylor at the Crossroads Women’s Centre.  We were also invited to speak on the panel after a public screening at the Court House Hotel, London . . .  Well worth catching this film if you can.  It definitely begins to spell out how survivors across the US were speaking out and organising together with Rosa Parks and the civil rights movement to expose rape in their communities, by white men, as part of the legacy of slavery. 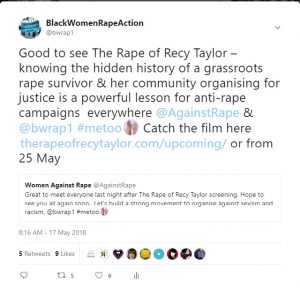