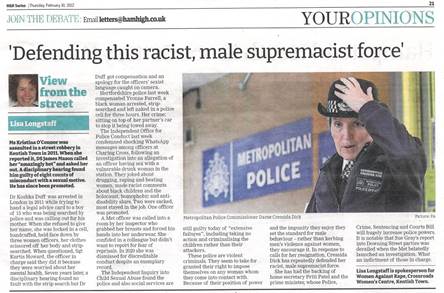 Ms Kristina O’Connor was assaulted in a street robbery in Kentish Town in 2011. When she reported it, DS James Mason, called her “amazingly hot” and asked her out. A disciplinary hearing found him guilty of eight counts of misconduct with a sexual motive. He has since been promoted.

Dr Koshka Duff was arrested in London in 2011 while trying to hand a legal advice card to a boy of 15 who was being searched by police and was calling out for his mother. When she refused to give her name, she was locked in a cell, handcuffed, held face down by three women officers, her clothes scissored off her body and strip-searched. When questioned, Sgt Kurtis Howard, the officer in charge said they did it because they were worried about her mental health. Seven years later, a disciplinary hearing found no fault with the strip search but Dr Duff got compensation and an apology for the officers’ sexist language caught on camera.

Hertfordshire police last week compensated Yvonne Farrell, a black woman arrested, strip-searched and left naked in a police cell for three hours. Her crime: sitting on top of her partner’s car to stop it being towed away.

The Independent Office for Police Conduct last week condemned shocking WhatsApp messages among officers at Charing Cross, following an investigation into an allegation of an officer having sex with a vulnerable drunk woman in the station. They joked about drugging, raping and beating women, made racist comments about black children and the holocaust, homophobic and anti-disability slurs. Two were sacked, most stayed in the job. One officer was promoted.

A Met officer was called into a room by her inspector who grabbed her breasts and forced his hands into her underwear. She confided in a colleague but didn’t want to report for fear of reprisals. In 2020 she was dismissed for discreditable conduct despite an exemplary record.

The Independent Inquiry into Child Sexual Abuse found the police and also social services are still guilty today of “extensive failures”, including taking no action and criminalising the children rather than their attackers.

These police are violent criminals. They seem to take for granted their right to impose themselves on any woman whom they come into contact with in the course of their policing. Because of their position of power and the impunity they enjoy they set the standard for male behaviour – rather than curbing men’s violence against women, they encourage it. In response to calls for her resignation Met Commissioner Cressida Dick has repeatedly defended her racist, male supremacist force.

She has had the backing of home secretary Priti Patel and the prime minister, whose Police, Crime, Sentencing and Courts Bill will hugely increase police powers. It is notable that Sue Gray's report into Downing Street parties was derailed when the Met belatedly launched an investigation. What an indictment of those in charge.