'Don't you want to know why I'm bleeding?'

An assault by a white neighbour on a Muslim woman in London has shown just how difficult it can be for victims of alleged racist attacks to prise open the doors of justice. Laura Smith reports 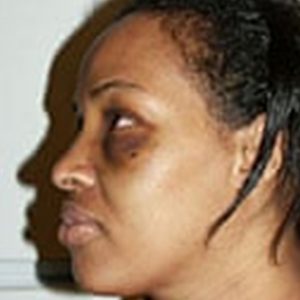 Bilan Mohamud shows the injuries inflicted on her by a neighbour

Bilan Mohamud was walking her children home from school in October last year when a neighbour punched her in the face. She says he called her a "fucking nigger", threatened to kill her, then launched his fist at her. She was left with a fractured nose and cheekbone, and lacerations below her left eye. She still bears the scar.

Last Thursday, the man who did this to her, Gary Read, 38, of the Wendling estate in Kentish Town, north London, was convicted of grievous bodily harm and remanded in custody for sentencing next month. The jury did not accept the racially aggravated aspect of the charge against him.

Read's attack on Mohamud, who is from Somalia and wears a hijab (headscarf), was not the end of her family's ordeal. When four officers from Kentish Town police station arrived at the Mohamuds' flat, the officers handcuffed her husband, Hussein, and accused him of threatening the neighbours. He had called 999 while chasing Read away with a pole from the vacuum cleaner, the nearest thing he could grab when he found his wife bleeding on the doorstep. Another emergency call made by a neighbour described seeing a black man armed with a large knife running around the estate.

Having searched Mohamud's husband and found no weapon, they released him. "The only thing they asked was the date of birth of my children and me," says Mohamud. "I did not answer. I was saying, 'Don't you want to know what happened to me? Don't you want to know why I am bleeding?' I was very upset, I was crying. They said they were going to arrest me if I didn't cooperate."

None of the officers asked Mohamud how she came by her horrific injuries or took any notes. No statement was taken from them or potential witnesses. They were given no contact details to follow up the case but advised to call 999 if there was more trouble. It emerged in court that the Reads were given a laminated card with the numbers of local police.

The Mohamud family were told that CID would visit that evening but nobody came. Repeated calls by Mohamud's husband and a visit to Kentish Town police station over the next four days resulted in no action. Officers could find no reference to the incident on the computer system.

In fact, no police officer came to take a statement from the couple or arrest Read until almost a week later - after campaigners at the Crossroads Women's Centre made repeated calls to police. They say the Mohamuds' experiences exemplify the difficulties faced by victims of potentially racist attacks at every stage of the process.

Racist incidents - predominantly property damage and verbal abuse - and racially motivated offences, which cover assault, harassment or criminal damage that can be shown to be racially or religiously motivated, rose by 7% and 6% last year, respectively. Yet the conviction rate remains low.

Last year, the number of racially or religiously aggravated offences recorded by the police was 37,028. Yet according to figures compiled by the Crown Prosecution Service (CPS) from the same year, only 7,223 were prosecuted in court for such offences. Of these, 48% - just 3,512 people - were convicted, and the remainder were either acquitted or had their case terminated early.

Lisa Longstaff, project coordinator at Women Against Rape, says such figures are not surprising. "There are so many hurdles. Beginning with the first call to the police, giving a statement, and right through to the sentencing, you are up against so much." She adds: "If we hadn't kept the pressure up, this case would never have made it to court, let alone got a conviction." Longstaff and Cristel Amiss, a project coordinator at the Black Women's Rape Action Project, say it took them four hours of continuous phone calls to the police before a detective sergeant from Holborn hate crimes unit agreed to send somebody to take a statement. The officer sent, DC Angela Reilly, said at Read's trial that the first officers on the scene "should have arrested him". Asked if they had conducted an initial investigation, she said: "It wasn't done very well." The family have lodged a formal complaint against the officers. It is being investigated internally by the Met's directorate of professional standards.

Ruhul Tarafder, campaigns coordinator for the 1990 Trust, an independent institute dealing with issues concerning black and ethnic minority communities, says the Mohamuds' treatment is "shocking but not surprising. I hear it all the time. Many people feel that the police themselves are racist, which means that the majority of these crimes don't get reported in the first place."

Tarafder is a member of the Muslim Safety Forum, an advisory body to the police. He says the unwillingness of officers to properly record or investigate such crimes is one cause of low prosecution and conviction rates. If investigations are not carried out properly early on, vital evidence is lost. And problems do not end there. "We find that if a case does make it to the CPS, the racist element is often taken out and ignored," he says. "They will often advise that it be dropped in order to secure a conviction." A CPS spokeswoman agrees: "If the evidence isn't there, if you don't have witnesses who heard racist language, then clearly you can't prosecute." Both Mohamud's eldest sons told Read's trial she was called racist names.

The attack on Mohamud has left her with recurring headaches and trouble sleeping. Her children still have nightmares. Her husband is on anti-depressants after being sacked from his job as a bus driver when he was on sick leave with stress.

The family stuck it out on the Wendling estate until January, when intimidation from neighbours forced them to leave. In the months after Read's attack, the family says they were called names, rubbish was dumped on their doorstep, eggs were thrown at their house and their front door and walls were banged on. "We called the police but they said it was children," says Mohamud. She says the police refused to install CCTV, but did put in a panic alarm.

Mohamud's husband says: "We wanted to stay. The children's school was three minutes away, and we had friends there. But I also wanted to protect my family. There was no safety for us there."

The couple and their eight children, who range in age from two months to 11-years-old, now live in temporary accommodation an hour-and-a-half each way from the children's school. They are relieved that Read has been convicted, but they are left with questions. Why were they treated as suspects, rather than as victims? "Our lives have been turned upside down," says Mohamud.

Police say they are treating the following recent incidents as racially-motivated attacks:

Friday July 28 Two Asian men, aged 24 and 30, were set upon by up to 10 white youths in Salford, Greater Manchester, who allegedly shouted racist abuse and beat them with sticks and branches.

Saturday July 22 Bank worker Shezan Umarji, 20, was stabbed to death by a gang of white men when violence erupted on the Callon estate in Preston, Lancashire.

Saturday July 22 Taxi driver Mohammed Pervaiz, 41, was attacked by a gang of white youths in Huddersfield, Yorkshire. He died from head injuries.

Wednesday May 17 An Asian man in his 30s was approached in Barking, east London, by a group of four white men, who allegedly racially abused him and stabbed him twice. Police are offering a £10,000 reward for information.

Thursday February 23 Khizar Hayat, 40, originally from Kashmir, was killed when the shop where he worked in Kennington, south London, was firebombed. This followed two other attacks on Asian businesses in the area.

Beena Faridi, a case worker at the Islamic Human Rights Commission, says: "If we were logging Islamophobic attacks, we could start to see trends, where victimisation begins with name-calling and then gets progressively more serious. If they are not logged, there's no way of knowing."

A spokeswoman for the Home Office says: "As part of our work on tackling hate crime, we are considering how data about individual crimes might be better managed. We are looking at how this might be done to identify trends to target preventive work."