Hundreds of rape victims still being denied compensation over past offences

Campaigners are demanding an end to the ‘scandal’ of women being denied Government compensation for sexual offences because of relatively minor past offences. One woman, who was repeatedly raped by two men when she was 13, was refused a payout because she had been prosecuted for driving without insurance and refusing to take a sample test, according to Women Against Rape (WAR).

The London-based group wants an overhaul of the Government-run Criminal Injuries Compensation Scheme (CICA), arguing that it has practised ‘terrible discrimination’ for decades.

WAR says the rules concerning unspent convictions disproportionately affect victims of sexual offences, who may also have their ‘character and conduct’ called into question.

Spokesperson Lisa Longstaff said: ‘The denial of compensation to victims of sexual offences with criminal convictions is a scandal.

‘Survivors in our network have been denied what should be an unquestionable entitlement for the violent crimes committed against them.

‘This terrible discrimination has continued for decades under a scheme that was set up in the 1960s and hasn’t kept pace with contemporary settlements that are made in civil courts for various reasons.

‘On the one hand you have cuts and tightening up due to over a decade of austerity and on the other there’s been a surge in all kinds of sexual violence in at least the last nine years since the Jimmy Savile case, which has led to huge demands on the scheme.’

The denial of compensation for victims of sexual assaults is said have been a further blow to those already facing a falling conviction rate.

The woman raped repeatedly by two adult men as a teenager was refused compensation on the grounds that she had been prosecuted for driving without insurance and refusing to take a sample test, according to WAR.

Another example given by the group is that of a victim who was seriously sexually assaulted by a teacher at the age of eight. She did not qualify for compensation because she had been convicted of threatening her boss when he refused to pay her wages.

Deducted claims challenged by WAR, which has an office in Kentish Town, London, include that of a 21-year-old woman who was allegedly raped by a taxi driver on a Christmas Eve.

Although the suspect was acquitted in court, the judge is said to have ordered an investigation into why five different officers were put in charge and a review of the basic groundwork in the case.

The woman was left afraid to use taxis and was stopped by police while driving and found to be slightly over the drink-drive limit having taken one glass of wine, according to WAR.

She was awarded the standard £11,000 for rape, which was reduced by 30% because of her criminal conviction, the group said. WAR supported her appeal as it was a spent conviction and there were other mitigating circumstances, so the deduction was reduced to 10%.

The Government responded today by saying the compensation scheme ‘is one the most generous of its kind in the world’ and it is clear that ‘victims should receive all the help the need’.

However, Ms Longstaff believes flaws in the scheme – which can pay out even where no person has been convicted – include a failure to take into account the severe impact a sexual assault can have on a victim.

She added: ‘The Government has always taken the stance that people who have cost the state money in prosecuting them for a crime do not deserve public compensation.

‘We say this is discriminatory because it affects some of the most vulnerable victims including those who may have been criminalised because of rape trauma they may have endured and young people who may have turned to drugs or alcohol to try and soothe their pain.

‘It has also bled into general moralistic judgements, particularly about sex workers who have been raped.’

Under CICA rules, a claimant’s ‘character and conduct’ can also be taken into account, which includes evidence of involvement in crime, minor cautions or reprimands and whether alcohol or drugs contributed to the person becoming a victim.

‘Even women without criminal convictions such as known sex workers have been refused compensation or had it reduced because it was decided they were partly to blame because of their immoral lifestyle,’ Ms Longstaff said.

The Government has changed the rules to include those who were previously denied compensation under the ‘same roof rule’, which barred payouts to victims whose attacker was a family member they were living with at the time of incident.

This was amended in 1979 but not made retrospective until three years ago, when the clause was abolished completely. However, WAR says that the Ministry of Justice (MoJ) has failed to carry out a wider overhaul, despite the group having submitted evidence to a review of the CICA system. 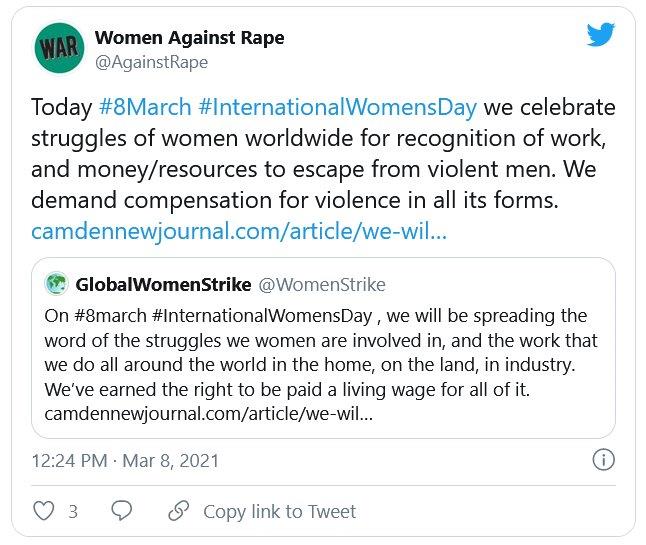 This was published in January 2021, making recommendations which did not reflect the group’s request to scrap rules used to deny payouts due to unspent convictions.

Ms Longstaff spoke amid an outcry over the safety of women on Britain’s streets, with figures showing that the rate for rape prosecutions has fallen to 1.5% in England and Wales.

She said: ‘Most people don’t get their attacker prosecuted, which is an important form of social acknowledgement of the crime and injustice you’ve suffered.

‘If you then get turned down for compensation it’s another way of the state telling you you’re not a real victim. The victims are left feeling crushed and insulted.

‘One of the women was aged eight when she was sexually abused by her teacher and when she’s thirty she gets a minor criminal conviction for threatening behaviour which is used to deny her compensation.

‘It’s such a galling injustice and a lot of victims have described been re-traumatised just by the process of applying.’

Campaigners say drink-drive offences are among unspent convictions denying the right to compensation for sexual assaults.

Figures cited by WAR show that at least 385 victims of sexual violence have been refused compensation because of an unspent conviction.

Since 2015, awards have been blocked for offences including theft, drink-driving and unpaid TV licences, the research shows.

Independent charity Victim Support also called on the Government to ‘rethink’ the rules.

External Affairs Manager Alex Mayes told Metro.co.uk: ‘It is very concerning that victims and survivors of some of the most severe crimes are having their claims denied due to unrelated incidents, including minor offences.

‘This is unfairly penalising some of the most vulnerable victims and can be distressing for those impacted. This approach must change and we strongly urge the government to rethink CICA’s rules on this issue.’

The Government’s ‘comprehensive review’ considered the unspent conviction rule, but concluded that any change would undermine the scheme’s ethos of ‘treating all victims in a fair and consistent manner’.

The MoJ maintains that withheld or reduced compensation is not intended to minimise the fact that victims may have suffered serious crimes, but reflects the ‘distress, loss or injury’ the applicant may have caused to another person in a case for which they were convicted.

Under the scheme, applicants can request a review of the decision and appeal to an independent tribunal.

An MoJ spokesperson said: ‘Rape and sexual assault are abhorrent crimes and we are clear that victims should receive all the support they need.

‘Our compensation scheme is one of the most generous of its kind in the world, with over £195m paid to victims last year and we are investing millions to deliver speedier justice and fund support services.’

In February, the Government announced £40million of funding to provide further support for victims of rape and domestic abuse.

It is also carrying out a review looking at how the criminal justice system handles rape cases from the police report to the courtroom outcome.