"Wave of prosecutions will follow" front page of The Times, 24 Oct 1991

Five law lords unanimously swept away the 250-year old notion that women agree to sexual intercourse on marriage and cannot retract their consent . . .

Yesterday's judgment, in the case of a Leicester man jailed for three years for assaulting and attempting to rape his estranged wife, laid to rest the principle established by Chief Justice Hale in 1736 that by marriage, a woman gave her body and irrevocable consent to sexual intercourse with her husband in all circumstances. Lord Keith of Kinkel, the senior law lord, rejected that as anachronistic and offensive, borrowing a phrase used by the Lord Chief Justice in the Court of Appeal in March. Lord Lane than declared that "a rapist remains a rapist and is subject to the criminal law, irrespective of his relationship with his victim".

Upholding his ruling, Lord Keith said that common law could change in the light of social, economic and cultural developments. 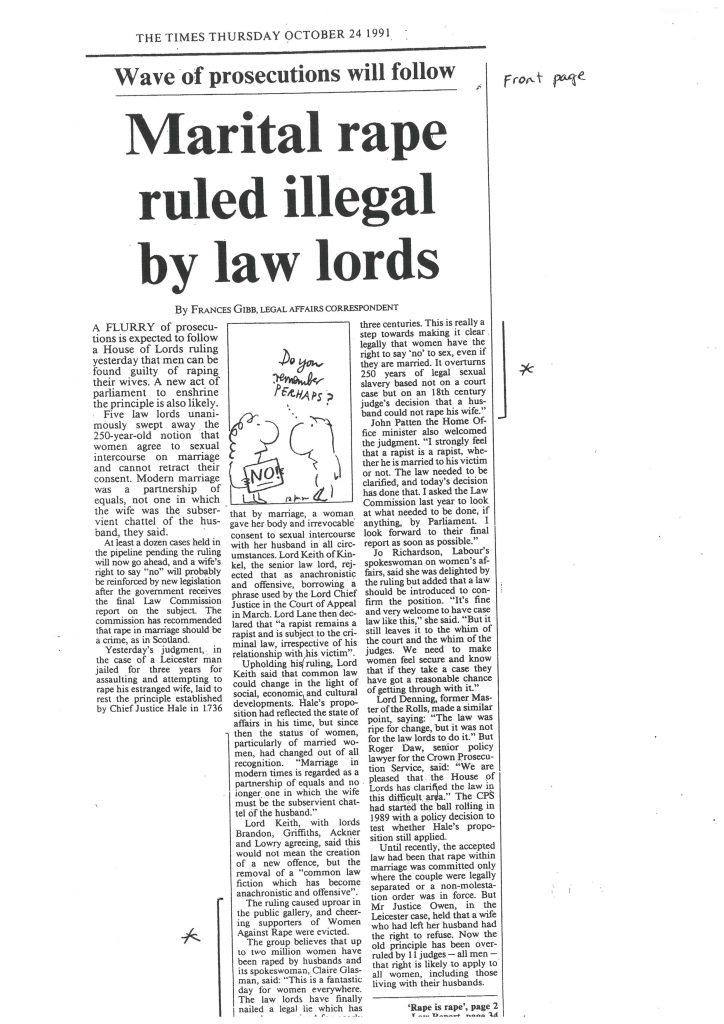 Lord Keith, with Lords Brandon, Griffiths, Ackner and Lowry agreeing, said this would not mean the creation of a new offence, but the removal of a "common law fiction which has become anachronistic and offensive".

The ruling caused uproar in the public gallery, and cheering supporters of Women Against Rape were evicted.

The group believes that up to two million women have been raped by husbands and its spokeswoman, Claire Glasman said: "This is a fantastic day for women everywhere. The law lords have finally nailed a legal lie which has somehow survived for nearly three centuries. This is really a step towards making it clear legally that women have the right to say 'no' to sex, even if they are married. It overturns 250 years of legal sexual slavery based not on a court case but on a 18th century judge's decision that a husband could not rape his wife."