Letter: The demonisation of Assange paves the way for more rape and murder by the State 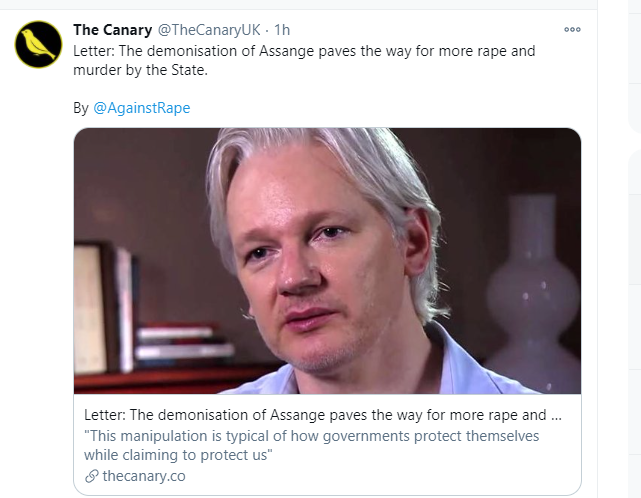 We are relieved the court ruled not to extradite Julian Assange to the US. His immediate release from Belmarsh, classified as torture by the UN Special Rapporteur, especially under coronavirus, must follow. The refusal of bail must be reversed immediately.

As an anti-rape organisation, we resent the original use of alleged sex offences to facilitate Assange’s extradition to the US via Sweden. Knowing the evidence, that case was never viable, but it initiated and fuelled a witch-hunt against Assange and diverted from the real target: his Wikileaks reporting.

Assange and Chelsea Manning exposed rape, torture, and murder by the US-UK coalition: war crimes that we all urgently needed to know about. After the 2003 invasion and occupation of Iraq, we wrote an open letter, ‘Neither Blood nor Rape for Oil’, to every woman MP. We were alarmed that none even acknowledged it.

The witch-hunt against Assange invited women furious at the continuing neglect of rape by the criminal justice system to join that system against Assange. This manipulation is typical of how governments protect themselves while claiming to protect us. It proved irresistible to many.

Contrast the determination to get Assange – the work hours and millions of pounds over 10 years – with the deadly lack of state protection for most victims of violence. While rape and domestic abuse soar, even faster under the coronavirus lockdown, they have been practically decriminalised. Women have had to campaign to expose police and CPS trawling through victims’ social media and sexual history to discredit them and drop their cases. The lucky 1.5% of reported rapes that ever reach court may have waited four years to get there.

If the government was serious about rape and domestic violence, it would make sure the police, CPS, and courts – both criminal and family – prioritise victims regardless of race, age, class, immigration status, or relationship to their attacker. They would increase benefits, resources and services women need to protect themselves and their children, and extend them to all women, including immigrants and asylum seekers excluded by the ‘no recourse to public funds’ rule.

They would end the ‘presumption of contact’ which enables violent men to use the family courts to continue their reign of terror against women and children and avoid prosecution. They would stop accusing mothers of ‘parental alienation’ when they report child abuse by violent fathers. And they would stop prosecuting rape victims they refuse to believe.

Much of this could be addressed in the Domestic Abuse Bill currently in the House of Lords. But the government has resisted amending the bill as demanded by women’s organisations. Instead, they promote the Covert Human Intelligence Source (Criminal Conduct) Bill and Overseas Operations bills which would enable rape, torture, and even murder by anyone the state gives a licence to, including corporations. The war crimes that Assange and Manning found proof of and publicised would be legalised and extended to UK soil.

Help us to get basic protections in the Domestic Abuse Bill and join the mounting opposition to the so-called Spy Cops and War Crimes Immunity bills.