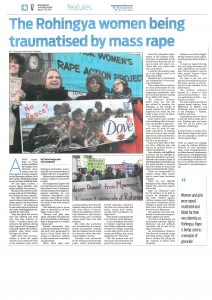 A new report, Rape by Command published by Kaladan Press Network, documents mass violence against women and girls by the Myanmar military, in its 2017 purge of Rohingya people across northern Rakhine State.

We met Pippa Curwen, a human rights defender, who helped publish the research. She has been involved in life-saving work on the Thai-Myanmar (formerly Burma) border for over a decade.

The chief researcher of the report is lawyer Razia Sultana, a former teacher. She interviewed 36 survivors – 24 women and 12 men who had just arrived on the border with Bangladesh having fled for their lives.  They described the torture they had suffered and what they had seen inflicted on others – horrific crimes committed by the military during their August 2017 campaign to ethnically cleanse the northern Rakhine state where many Rohingya had lived.  Eight were rape survivors.

Sultana is from the region and this is the closest we have to the authentic voices of the Rohingya themselves, uncensored by the interpretations of outside observers or academics.

Sultana had recorded earlier witness evidence of atrocities in 2016. The Background chapter tells how the Myanmar government had refused visas to independent international investigators, instead installing its own “Rakhine Investigative Commission”, which did not report any instances of abuses during the whole 2016 military operations. This impunity gave a green light to atrocities on an even larger scale in 2017.

“Women and girls were raped, mutilated and killed for their very identity as Rohingya. Rape is being used as a weapon of genocide.”

Sultana documents testimony that hundreds of women and girls were gang-raped in front of their loved ones by groups of Myanmar soldiers as their homes were ransacked and destroyed.  Often, these rapes were accompanied by other horrific violence using knives, burning and other forms of torture.  Women and children were brutally attacked in their homes, while fleeing, and in military camps where they were held prisoner.
She notes that particular acts of mutilation of women’s breasts and genitals, indicate that the violence was the result of a directive, rather than individual soldiers’ actions.  Atrocities were authorised by the military and the border police which systematically cleared Rohingya communities from the countryside and towns, razing their homes, leaving only non-Muslim villages intact.  They aimed to extinguish the very existence of the Rohingya.

As an immediate precursor to violence targeting women and children, Myanmar troops invaded the villages, rounding up men and boys for arrest, torturing and killing, often using allegations of “terrorism”. This left women and children alone and vulnerable and paved the way for mass rape.

Given the systematic organisation of the military raids, with were co-ordinated by the armed forces from the sea, air and on land, the report concludes that war crimes have been committed.  It calls for the military leaders at the highest level to be held responsible.

Myanmar has so far blocked any independent UN fact-finding investigation.  This is being used as a pretext for some governments to take no action at all, and to carry on supporting investments with the excuse that they are waiting for an official UN report.
The country’s de-facto leader Aung San Suu Kyi has refused to mention the Rohingya to the outrage of people around the world who supported her when she was under house arrest.  Some experts have avoided acknowledging that this mass rape and murder is genocide.

As anti-rape organisations with over 60 years of combined experience of working with survivors of rape, including historic child and domestic abuse in the UK, we know how hard it is to get justice.  Some of us have fled to the UK after suffering rape and torture by military or others in authority.  Our collective self-help with survivors, and our attempts to hold their attackers to account, addresses the trauma of rape, of witnessing loved ones killed, and the many barriers to recovery faced by victims of sexual and racist/Islamophobic crimes. These are compounded by losing your home and/or becoming a refugee.

There are now 900,000 Rohingya in the camps of Bangladesh who need our support and action. Rape by Command calls for:

The Sisters of Rohingya are demanding sanctions against Myanmar, not just military sanctions, and an end to foreign investment.  On International Women’s Day, 8 March, we joined a large and lively picket outside Unilever HQ, London, calling for the company to divest from Myanmar. 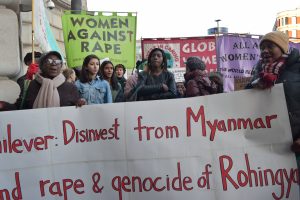 Unilever is one of the biggest foreign investors in the region, annually investing $667m.  It claims to respect the dignity and rights of women and girls, especially in its marketing of Dove products, and has been named “Impact Champion” by UN Women.  It’s time it put this into practice by withdrawing from Myanmar instead of enhancing the funds available to the military government.

The Unilever protesters handed in a letter to Chief Executive Paul Polman (who was paid £9.4m in 2015) urging him to divest.  The international movement against sexual violence, from Hollywood to #MeToo and Time’sUp, must be extended to the Rohingyas – women, children and men.

Corporations must be forced to put life before profit and to stop funding rape and genocide.  We are all sisters and brothers of Rohingya.

Cristel Amiss is a member the Black Women’s Rape Action Project and Lisa Longstaff is a member of Women Against Rape.

You can support the campaign by using the hashtags  #No Peace  #No Dove
For more information please email bwrap@rapeaction.net; follow @bwrap1; or email war@womenagainstrape.net ; follow @AgainstRape; or visit the Sisters of Rohingya blog sistersofrohingya.wordpress.com. You can see the full report Rape by Command at: www.kaladanpress.org