A mother whose daughter was raped at the age of 15 has said ‘nothing has changed’ in more than a decade since the attacker escaped justice.

Sally Freeman said that ‘if anything, things are worse’ for women and girls because of the low level of national convictions for rape.

Mrs Freeman called for Metropolitan Police Commissioner Cressida Dick and Home Secretary Priti Patel to quit as she attacked the lack of protection for women and the policing of the Sarah Everard vigil in London.

Her daughter was raped in 2005 with the man accused acquitted at court the following year after a catalogue of errors by a police unit in Southwark, south London, which included losing and failing to gather evidence. 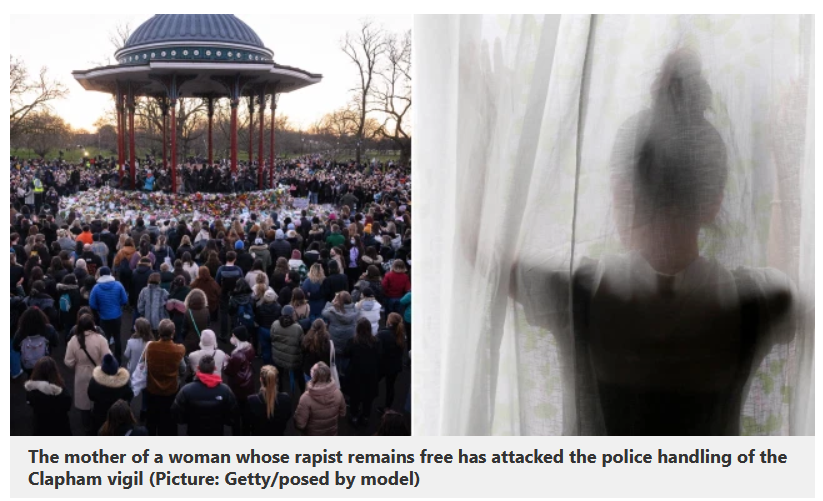 A damning report was published by the then Independent Police Complaints Commission (IPCC) in 2009 and four officers were disciplined. At the time, car crime was being treated more seriously than rape by the Met’s specialist Sapphire unit, Mrs Freeman told Metro.co.uk.

The Londoner, who volunteers for Women Against Rape (WAR), has been dismayed to see the rate for rape prosecutions fall to 1.5 per cent in England and Wales for recorded cases in the year ending September 2020.

She said: ‘The whole criminal justice system was completely shocking back then and, 16 years on, nothing has changed. If anything, things are worse if you look at the conviction rate. The mother of a rape victim says nothing has changed in the 16 years since the attack.

‘We never got justice and after a long slog an IPCC investigation revealed that car crime was given a higher priority than rape. ‘They [the police] never gathered the evidence and the CPS didn’t go back to the police for the evidence and prepare the case, so it was destined to fail before it even got to court. ‘The way the case was handled made me think of the way women were treated in Victorian times. ‘You take up these battles to try and change things for women and the way the whole justice system works against us, but when you look at what is happening now it’s really worrying.’

Mrs Freeman’s daughter, who cannot be named for legal reasons, was raped by a 28-year-old man after meeting him in the street the day before.

Believing he was 19, she got in a car with him, a mistake made by a young teenager which has left her traumatised into adulthood.

Regretful at having got into the car and having been threatened by her rapist not to tell anyone one, it took her six weeks to tell her mother, who persuaded her to go to the police. After a long wait for a trial the defendant was acquitted, with the victim receiving no support afterwards.

The watchdog found that the former Southwark Sapphire unit, which centralised the Met’s rape investigations, had prioritised car and street crime to boost performance figures..

Mrs Freeman said it had been a ‘long old trek’ as she pursued multiple complaints, which also resulted in her daughter eventually receiving compensation of £11,000 from the Criminal Injuries Compensation Authority.

The mother-of-two drew a parallel between her daughter’s case and the Police, Crime, Sentencing and Courts Bill, which increases the maximum sentence for defacing monuments from three months to 10 years. Rape sentences start at five. ‘There’s more emphasis on a statue than a person’s life,’ Mrs Freeman said. ‘Let’s face it, when a person’s raped, it can destroy a person’s whole life. ‘It’s always there at the back of your mind.

‘I’ve got daughters, sisters, nieces and we’ve all experienced some kind of sexual harassment or assault, even in childhood.

‘My other daughter, who is 27, has said that men have come up to her in the street and harassed her for her number, to the point that she feels she can’t say “no”. Women feel constantly harassed and under threat.’

Mrs Freeman, who is in her 50s and works at WAR’s women’s centre in north London, was shocked at the police handling of the vigil in Clapham Common for Sarah Everard, whose remains were found on March 3 after she went missing while walking home from a friend’s house.

Sir Stephen House, the Met’s Deputy Commissioner, has defended the officers who handcuffed and removed women from the gathering on Saturday, saying they were ‘doing their duty as they saw it’ to enforce Covid rules and had encountered abuse from some in the crowd.

WAR, which describes itself as grassroots and multi-racial, has repeatedly called on Priti Patel and Cressida Dick to resign over the wider issues including the policing bill and low prosecution rates.

The group has claimed the figureheads ‘do not speak for women’ and ‘their priority is greater police powers not our safety’.

Mrs Freeman said of the vigil: ‘It’s shocking, women are outraged. There was no violence there from the women, it was heavy-handed and brutal. I think Priti Patel and Cressida Dick should go. ‘How can you defend police officers who are handling women like that?’

Mrs Freeman, who does not use her real name, wants to see the criminal justice system use the tools it already has in a more effective way.

‘Instead of putting new laws out, they need to implement the laws they already have, taking women seriously when they report a rape,’ she said.

If the police and CPS don’t do their jobs, the people should be sacked.

‘You hear them say all the time that lessons will be learnt, but people should be held accountable.’

Mrs Patel has said she shares the sense of anger felt at the killing of Ms Everard and the ‘danger posed to women by predatory men’ but has urged people not to attend protests. She has instructed the police watchdog, Her Majesty’s Inspectorate of Constabulary, to review the way the vigil was policed.

A Government spokesperson told Metro.co.uk: ‘Rape victims deserve to know their case will be taken seriously and that these vile offenders will be brought to justice.

‘This is why we are reviewing our response to this horrific crime, while investing millions to deliver speedier justice and fund support services, and we have worked hard to introduce protective tools such as Sexual Harm Prevention Orders, Sexual Risk Orders and Stalking Protection Orders to better support victims.

‘We recognise that there is more we need to do to tackle the root causes of gendered violence and to support women.

That is why we have reopened our consultation on Violence against Women and Girls and would encourage everyone to share their views to develop our future strategy.’

The Government also said its Domestic Abuse Bill going through the House of Lords will help protect victims and bring perpetrators to justice.

It further stated that the policing bill will end the halfway release of offenders sentenced to between four and seven years for sexual offences, making them spend two thirds of their time behind bars.

The police and CPS are developing a joint action plan to improve the investigation of rape and serious sexual offences.