‘Women will live in fear until we see changes’

PAIN and anger in the wake of Sarah Everard’s killing must lead to ­permanent changes in the UK and a strengthening of laws to make women feel safer, campaigners demanded this week. 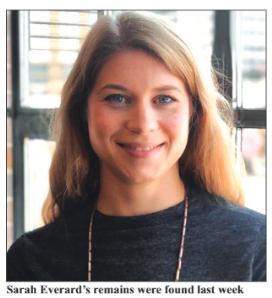 In the days since the 33-year-old’s remains were found in Kent last week, social media has been filled with women sharing their stories of being harassed, attacked and feeling like they have to be constantly vigilant in public spaces.

Thousands have laid flowers in Clapham Common while Camden Council lit up its building in orange lights in “remembrance” of all those who had lost their lives to “gender-based violence”.

The government, police and institutions in the UK are now being challenged to mark Ms Everard’s death with change, including more prosecutions for sex crimes against women.

The number of rapes and sexual assaults being reported to police has risen sharply since 2015, but the number of cases ending up in court has more than halved over the same period. In the year to March 2020, only 1.4 per cent of rape investigations, nationally, ended in a suspect being charged.

The number of guilty verdicts is an even smaller figure.

Lisa Longstaff, spokes­person for Women Against Rape (WAR), based at the Crossroads Women’s Centre in Kentish Town, said sexual and violent crimes against women and children needed to be prioritised so women can be “confident” that attackers will be dealt with.

She said: “We are up against the justice system every day so we know first hand the dismissive, racist and sexist responses women who come to us for help get. Most of the time nothing is done, but even if an investigation is launched it’s not done adequately, evidence isn’t gathered properly. Then we see charges being dropped – if any had been made at all. Most of the time it doesn’t get further than the CPS [Crown Prosecution Service].”

She added: “Rape has been decriminalised be­cause so few are prosecuted and that sends a message to men that they can do whatever they want and get away with it.”

Ms Longstaff added female police officers have rung her in tears because they feel they are letting victims down.

“Police and the CPS still claim rape is a priority but it’s just not true,” she said.

“This is a matter of resources, police choose where to use their resources and it’s not on this sort of crime. Ultimately lack of investigating and prosecuting leads to murders. Two women a week die at the hands of partners or ex-partners who have often been previously reported, sometimes multiple times, for threatening behaviour or assaults.”

The debates this week have raged from how to reduce sexual violence and general fear among women – on a walk home from a night out, for example – to commonplace misogyny, including wolf-whistling.

Benaifer Bhandari, chief executive of Hopscotch, an organisation in Euston which provides support for Asian and minority women said: “There is a lot of anger out there at the systematic problems we face but women need to know they can still put that anger to good use. They can protest, they can speak up for themselves, and those in positions of influence can use that influence, especially to help those who have no voice.”

Among the changes being called for this week are for public sexual harassment to be made illegal and misogyny to become a hate crime.

Hampstead and Kilburn MP Tulip Siddiq said the nation needed to “harness the moment”, adding: “No longer can our society tolerate the misogynistic attitudes that have too often pervaded our society and fuelled violence towards women. There must also be a significant strengthening of the law to ensure that women are properly protected from the disproportionate threats they face.”

Labour councillor Angela Mason, Camden’s education chief, said: “Women need to be encouraged to report instances of harassment, threats to safety, name-calling, all things that happen to women every day and are normalised and not recorded. If this was done it would impact on everything from policy, policing to the administration of justice.”

She said crimes perpetrated against women in public spaces are strongly linked with domestic abuse.

A new report on domestic abuse prevention in Camden released by the council this week shows the number of people contacting public services due to domestic abuse rose by 20 per cent between 2019 and 2020.

Luisa Porritt, the Liberal Democrat councillor who is also a mayoral candidate, said: “If I go for a run, I get catcalled, people shouting out of their cars and that’s not an exception. That’s pretty standard for most women. Let’s keep on talking about it and start the work on things that make a difference.

“The UK hasn’t even ratified the Istanbul Convention, which would provide support for women and girls who are victims and make perpetrators face proper consequences.”

She is among those who have called for Dame Cressida Dick to resign as Metropolitan Police commissioner over the police handling of the Sarah Everard vigil in Clapham.

Conservative group leader Cllr Oliver Cooper said: “The scenes on Clapham Common are unconscionable. The Metropolitan Police’s leadership has seriously misjudged this, and has exacerbated a lack of trust that has been created by Sarah’s killing. There needed to be a moment for her and other victims.”

Council leader Georgia Gould said: “We have always passionately believed Camden should be a place where women feel safe and can live, work and socialise – day or night – without fear of being harassed or attacked. Yet the evidence shows that the lived reality for women is very different – 80 per cent of women in the UK have reported they have been sexually harassed in ­public.”

Wayne Couzens has been charged with murdering Ms Everard and is due to stand trial in the autumn.